Guys, I know a few of us have SSDs. I'm pretty sure more do than we know.

What say we all share any tips or tweaks we might have so we can all benefit from each other's knowledge.

Or maybe we can ask a question, someone else may have the answer.

Currently, I get the following stats when testing. I wonder how this compares with yours and if it can be tweaked.

I would also ask if there's anything to the stuff you read online about disabling indexing, things like that.

Haven't done any tweaking of any kind. 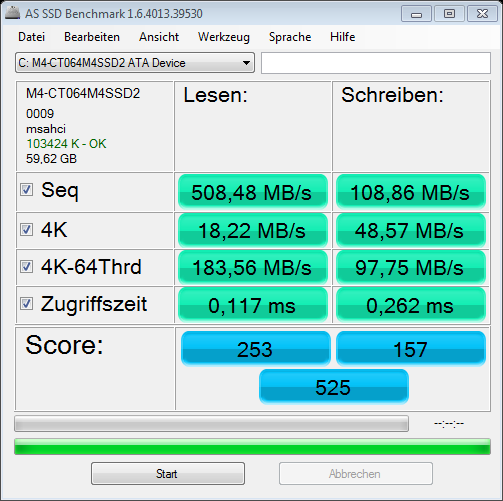 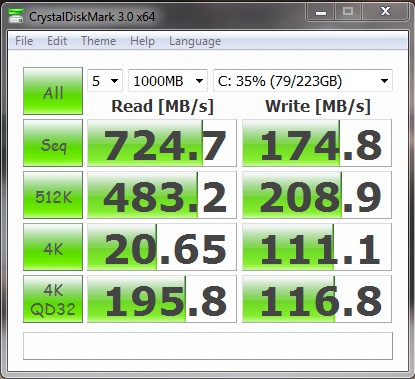 I don't see anyone sharing "tips or tweaks"; I only see folks posting performance numbers.

If this thread is only going to be a "My SSD is faster than your SSD!" thread, then what's the value?

There really aren't that many tips to share regarding SSDs. What do you want to know? Which ones are the most reliable (but not necessarily the fastest)? Intel and Samsung.

Make sure 'Write Caching' is enabled for your SSD in Device Manager.

If you are cloning your system from a hard drive to an SSD using disk cloning software such as Acronis TrueImage, make sure to read about SSD partition alignment first.

Do NOT use a disk defragger on your SSD, this provides no speed gains and seriously reduces the life span of your SSD (Windows 7 is SSD savvy, so you don't need to worry about the Windows defragger).

Make sure AHCI mode is enabled instead of IDE mode, it's faster. If you're still using IDE mode, read THIS before switching or you risk not being able to boot into Windows afterwards.

Read about TRIM and why it's so important. Read about Garbage Collection too.

Someone else takeover now...

Some of you may want todays giveawayoftheday it's from Paragon, a trusted name in software. Even if you have already migrated over, you may want this software,  Paragon Migrate OS to SSD 2.0 Special Edition

Is it worthwhile using a SATAIII SSD on a SATAII mobo as far as any additional performance and the obvious ability to use the same SSD on a new upgraded system with a SATAIII mobo?  I'd like to go SSD someday, but doubt if it will be in conjunction with a complete new sysytem. I would want to be able to get my moneys worth from the SSD when the time came for a new build, though.

Is a SATAII MLC type SSD the lowest rung on the ladder or does that belong to Hybrid drives? Is it better to just go ahead and spend the money on SATAIII instead?

OK, now Jorge is being more useful, he does that a lot. Thanks Jorge.

I am guessing, since it wasn't listed, that the above stats that are much higher numbers must be using Sata 3?

If no, why the major speed over mine?

If this thread is only going to be a "My SSD is faster than your SSD!" thread, then what's the value?

I was hoping it wouldn't be. I was hoping to gain/share info. I read all kinds of tweaks online, I also read that a good portion of them are for the first generation disks and may not apply to today's technology. So I started this thread to see if any of you guys had real info.

I never was able to find anything in my BIOS to set to AHCI mode. Trim is on and supported.

I didn't clone to the SSD, I did a fresh install. I do use Acronis to keep backups.

So, is indexing off, or on?

JcRabbit
Reply #14 Wednesday, April 25, 2012 11:47 AM
RedneckDude
reply 13
I am guessing, since it wasn't listed, that the above stats that are much higher numbers must be using Sata 3?  If no, why the major speed over mine?

No, it's Sata II. What you missed in the description is the 'RAID 0' part: that means these are three individual drives which the OS sees as a single drive, with each drive connected to an individual SATA port.

The maximum bandwidth *per device* for SATA II is 300 MB/s, but here we have 3 drives/devices. Again, note that the SATA II 300 MB/s limit is *per device*.

None of the X25-M G2 drives is *individually* able to transfer data faster than the 300 MB/s limit (the X25-M G2 maximum read speed is about 257 MB/s). However, the RAID 0 splits (distributes) data across all the 3 drives simultaneously, i.e.; it reads and writes data to all 3 drives at the same time.

For instance, imagine you have a 9 MB block of data you are writing to the SSD, the first 3 MB of that data gets written to the first drive, the middle 3 MB to the second drive and the remaining 3 MB to the third drive. All three write operations are performed simultaneously.

The theoretical limit then becomes 3 x 300 MB/S, or 900 MB/S. Theoretical because there is another limit, the SATA II interface, which saturates at around 700 MB/s (in other words, I would not gain anything by adding a fourth SSD to the RAID 0 array, except in *write* speeds, since the read speeds of all 3 X25-M drives already fully saturate the SATA II bus).

RAID 0 has a major potential problem: if one of the drives goes south, the whole array goes south and you lose all your data. Same thing would happen if you were using a single drive, of course, but the difference is that every time you add a drive to a RAID 0 array you are doubling your chances of a malfunction (for the simple reason that you are adding one more component that can go wrong). On the other hand, SSDs, having no moving mechanical parts, are much more reliable than hard disks - plus I backup my data everyday to external hard disks.

Starcandy
Reply #16 Wednesday, April 25, 2012 12:05 PM
RedneckDude
reply 13
I am guessing, since it wasn't listed, that the above stats that are much higher numbers must be using Sata 3?

Yup! That and the fact they're most likely set to use AHCI.

Edit: Oh yeah, and that whole RAID thing Jorge has going on.

RedneckDude
reply 13
So, is indexing off, or on?

I think you have to turn indexing off manually. You can use the tweak guides at the bottom of the post to do that.

I'm not sure about actual data but the non MLC drives are SLC and eMLC drives and are generally used in enterprise. They cost a heck of a lot more than the kind you or I may buy, but if I remember right, that's because they also have more writes than ours, which are generally limited to around 10,000 (which is still a lot). Here's an article that may help LINK

Hybrid drives basically offer more storage than just a pure SSD, though the memory part of the drive does help somewhat and acts as cache for most used programs, etc. I'm not quite sure, so don't quote me, but I think while they are faster than just a standard mechanical drive, they still aren't as fast as a pure SSD.

Various manufacturers are starting to offer an SSD that acts purely as cache once it is connected to a regular drive. Though they do seem to have their downsides. Here's a link for an article only published today LINK

SATA III is better than SATA II because of the speed difference. SATA III is 6Gbps, whereas SATA II is limited to a maximum of 3Gbps. A SATA II or SATA III SSD on a SATAII mummyboard is still going to perform better than a SATA II mechanical drive (or a SATAIII one for that matter).

Me personally, I'd plunk down the extra cash on a SATA III SSD, but that's just me. They're not as pricey as they once were.

Crucial, Intel and Samsung seem to be the most reliable SSD's from what I can tell, though they aren't necessarily the fastest.

Oh, and some tweak links that may be useful. Though they all offer much the same tweakwise.

JcRabbit
Reply #18 Wednesday, April 25, 2012 12:10 PM
Wizard1956
reply 11
Some of you may want todays giveawayoftheday it's from Paragon, a trusted name in software. Even if you have already migrated over, you may want this software,  Paragon Migrate OS to SSD 2.0 Special Edition

I purchased that to align the partitions of my Intel 320 SSD in my Sony Vaio laptop, worked just as advertised. I purchased the laptop and the SSD separately, and asked the shop I purchased both items from to clone the laptop's original hard drive to the SSD for me. I forgot to warn them about the alignment issue when cloning an hard drive to an SSD, and when I got the laptop it was obvious they didn't know about that.

Wizard1956
reply 11
Is it better to just go ahead and spend the money on SATAIII instead?

A single SATA III SSD will saturate a SATA II connection, so you will be getting only half the maximum possible read speed. For the laptop, for instance, I went with a SATA II SSD, no point in paying extra for a SATA III drive on a laptop with a SATA II interface.

For a Desktop, on the other hand, I would probably get a SATA III SSD, provided I was already planning to upgrade the motherboard/CPU later. Personally I prefer to upgrade most components all at once and then keep the same system for 2-3 years.

Ehehe. If you get two SSDs, just RAID 0 them together (provided they are both the same model and capacity). What you get is double the capacity *and* double the speed of each individual drive. Unlike hard disks, a SSD RAID 0 array scales linearly.

I hate you, Jorge!

JK (can I have your old rig.... pleeeeeeeease!)