Windows 11 isn't even on my machine yet!

When my redneck friend (yeah, the one I always 'shop') sent me this Windows 12 tidbit, I figured "He's seeking vengeance for all my miserable shops." Then I started researching it. As with most things MS, there are two sides. One says it's in the works, the other says nah, 11 is barely here.

It seems it's all based on a SwiftSecurity tweet which was supposed to be a joke, and was deleted. Well, that stopped nothing in our current age of conspiracy theories, of course. 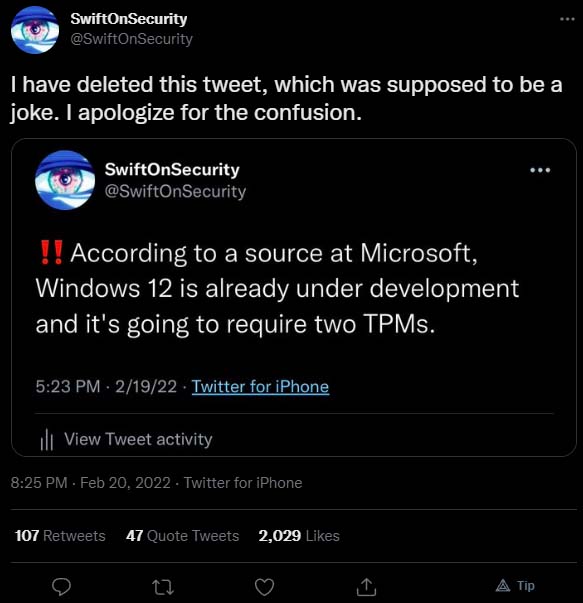 What then followed was a list of what should be in W12, it's release date and what's needed for W12, etc.

MS has, of course, revealed nothing and confirmed even less.

Say, didn't they say W10 was the last OS and it would be updated indefinitely? I guess the sales department had something to say about that idea.

As usual, Martin Brinkmann at gHacks is the voice of sanity at the eye of this tempest in a virtual tea pot:

"Microsoft's Windows 10 operating system is supported until 2025, Windows 11, which Microsoft released just last year, has no final end of support date yet. Feature updates are supported for 2 years for Home users and Microsoft will release new versions that are supported for another 2 years.

If Windows 11 is supported for 10 years, the period of Windows 10's support, then Windows 11 will be supported until late 2031. Windows 12 will likely be released in the meantime, if Microsoft continues to push forward with its strategy." - Martin Brinkmann (gHacks)

My thought? MS always has something in the works. Is it W12 or just another OS to stimulate computer sales with hardware requirements...or is there a difference? 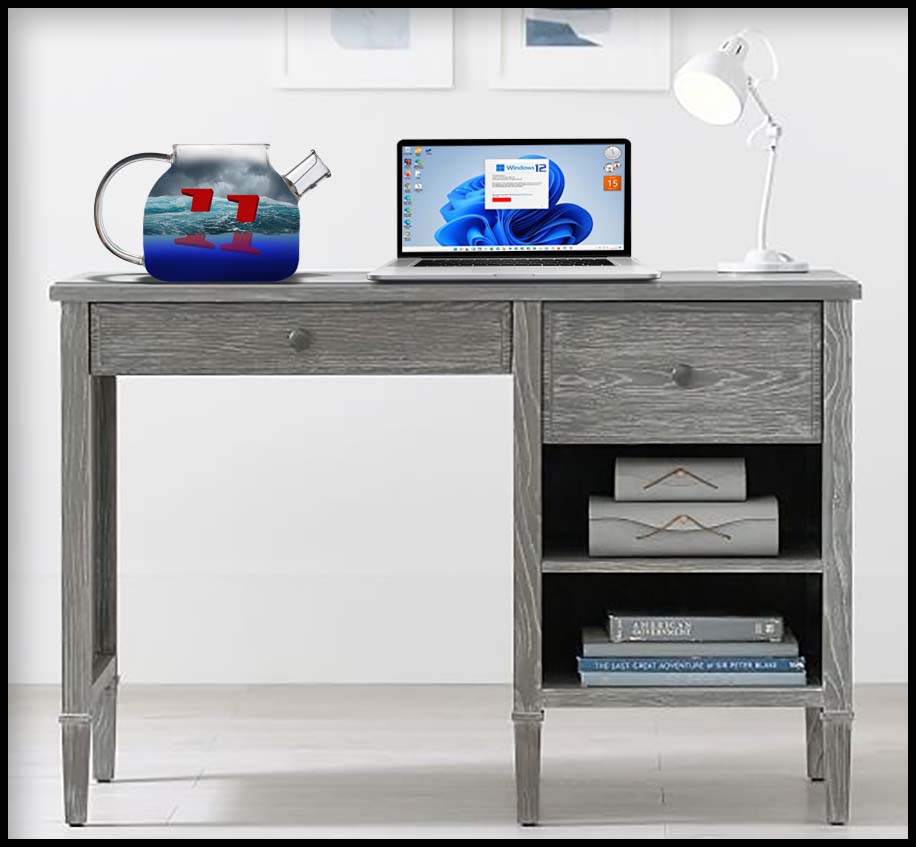 I am beginning to really HATE Microshit!

It is all about the money.

And no RedneckDude in sight.

Hi DrJBHL   hope you are well.

This was brought up a little while ago in another topic, most of the replies connected to it said it was not correct.

I would like to think i get around the net a bit as i have many interests including running my own Forum. I too have seen a few Windows 12 Topics listed here and there on places not connected to each other, due to this, i tend to believe there may be something in this. I do not think we will see a full blown new OS, more a big feature update to Win 11 which may get the Win12 Name in some way. Time will show us the way, so for now, i am watching the various sources that are reporting and commenting on this.

As I wrote, MS is always working on something...which will cost you directly or in directly.

My Windows 7 with 0Patch is working just fine and dandy.

Quoting naroon1,
reply 4
i tend to believe there may be something in this.

As I wrote, MS is always working on something...which will cost you directly or in directly.

As we all know that has been the MS Model for such a long time now, making us pay one way or another. One thing i do know is other more resourceful peeps will always react with work arounds nullifying all what is seen as negative, leveling the playing field. This has happened every time MS has done something a lot of users hate, no reason to worry about this possible development, whatever they call the next OS or feature release.

Jafo did you pay for 0Patch, i am curious (No intention of going back to any older OSs).

There is no such "windows 12" under development. that information was a joke by @swiftonsecurity on twitter . he deleted his tweet after.

Jafo uses the paid edition. There is a free one.

cefyerukka
reply 8
There is no such "windows 12" under development. that information was a joke by @swiftonsecurity on twitter . he deleted his tweet after.

It seems it's all based on a SwiftSecurity tweet which was supposed to be a joke, and was deleted. Well, that stopped nothing in our current age of conspiracy theories, of course.

Windows 12 would be a horrible idea at this point. It is better to have 1 finished OS than 2 unfinished OS's in circulation. Fortunately, I believe Windows 12 is not a serious idea yet and is more as a way to talk up their new security chip.

Indeed. M$ is about money...as teddybearcholla and I mentioned. Don't forget all the $urfaces which will come wrapped around that chip.

From the west news

"New features are expected to be added to Windows 12 in 2021. Microsoft plans to release this product somewhere between April and October of 2022, as previously stated. This suggests that the software’s formal launch and release date are both coming up soon."

This is the funniest part of the Windows 12 rumor because the release that is being talked about here is none other then 22H2. How did someone mistake it for Windows 12?

I do think that the rumor probably did get started somewhere within Microsoft, probably their surface department, mostly to get hardware sales up. Saying devices with the chip already installed are sure to be Windows 12 proof is a good sales tactic. I am not sure Windows 12's design is much beyond that yet though and probably won't be for a few more years.

I do suppose there is some truth in saying you may need to invest in the chip. But, I do not think Windows 12's release is impending soon. That part is just from hungry reporters.

I have been running Windows 11 on my "uncompatible" machine for several months now and I can say that I have not had a single issue with this OS since starting it's use. There is literally nothing that I can complain about. It's been running flawlessly.

It was reported Yesterday in Computeractive Magazine, that Windows 12 is a real thing, apparently sources at MS has said they are moving back to a new OS around every 3 years or so , with a new OS around 2024.Of coarse, there is no official leak from MS, but i trust the magazine Reporter who wrote the article, he does seem to have good insider info about this and previous big stories he has published. Here we go again, i have only had Win 11 22H2 for around a month now, hope this does not effect any SD Programs in the works.

They say they are doing this so they can release new windows features regularly, calling them " Moments". I will have no choice but to start using this Win12, as soon as it is released, that makes my job more difficult as i have to say familiar with all current OSs that are still in support.

And what do you bet there'll be new hardware demands to force you to buy a new computer for the OS that'll take a year or more to iron the bugs out of?

Quoting naroon1,
reply 15
Windows 12 is a real thing, apparently sources at MS has said they are moving back to a new OS around every 3 years or so , with a new OS around 2024.

And what do you bet there'll be nemw hardware demands to force you to buy a new computer for the OS that'll take a year or more to iron the bugs out of?

Probably, but no doubt there will be work arounds on github close to day 1 of Windows 12's release.

And what do you bet there'll be nemw hardware demands to force you to buy a new computer for the OS that'll take a year or more to iron the bugs out of?

Probably, but no doubt there will be work arounds on github close to day 1 of Windows 12's release.

Hi Doc, possibly will be more HW Reqs, but surely, you now must be a believer in the theory that everything MS does , and if not liked by peeps like myself and others, will be negated and put right back to how the masses prefer it.

I never had any bugs in my Win 11 Enterprise from day one Doc, smooth running, Only problem for me was no WB11, but even that cloud had a silver lining, i discovered Themes.

PhoenixRising1  Hope you are well as i have not seen a lot of activity from you mate.

I don't think the answer to MS's using its OSs as hardware marketing tools is hacking or "patching". We'll continue to be at odds about that because fundamentally, these efforts probably void warranties.

And I think it's safe to say the vast majority of users won't fool with it.  Many (Most?) won't even go through the o/s settings provided by MS to minimize the exposure, researching those and digging them out is enough of a chore in itself.