I recently picked up a new 4K monitor for my PC as I gave my current ultrawide to my wife for her work at home setup. I realized I had purchased that monitor in 2016 for this PC which means it was even older. Looking back at my receipts and my previous blog on my PC build, I was a bit surprised that I built it in 2015. I've updated a few things over the years with the last upgrade being a GTX 1660 Super video card, but otherwise it was mostly the same. It has worked very well over the years, but it was time for a new build.

After doing some research and using tools like the PC Builder on Newegg, I had a list of the parts I needed to get. Since I was going to put this PC on my desk, I wanted an RGB build so I went with mostly a Corsair build since I have a Corsair keyboard and I could sync all the colors up using their iCue software. Since the video card was fairly new, I just moved that to the new build as it works great, and I didn't want to deal with the current pricing and availability of video cards with the current situation. I also kept my data and games SSD drives as they were also a recent upgrade and it made it easier as I wouldn't have to move a lot of data around.

I ordered everything off Amazon as they had the best prices, and it would be here in just a couple of days. Everything arrived on the same day and I was excited to start the build. I pulled everything out and then I noticed something wasn't right about the motherboard. The M.2 heatsink was only attached with one screw, and the plastic covering the thermal pad was gone. Maybe it came loose during shipping, so then I moved on to putting the CPU on. Then it was pretty obvious I was sent a used motherboard.

Someone left their CPU cooler plate attached to the back of the motherboard, and then I saw the CPU pins were bent! 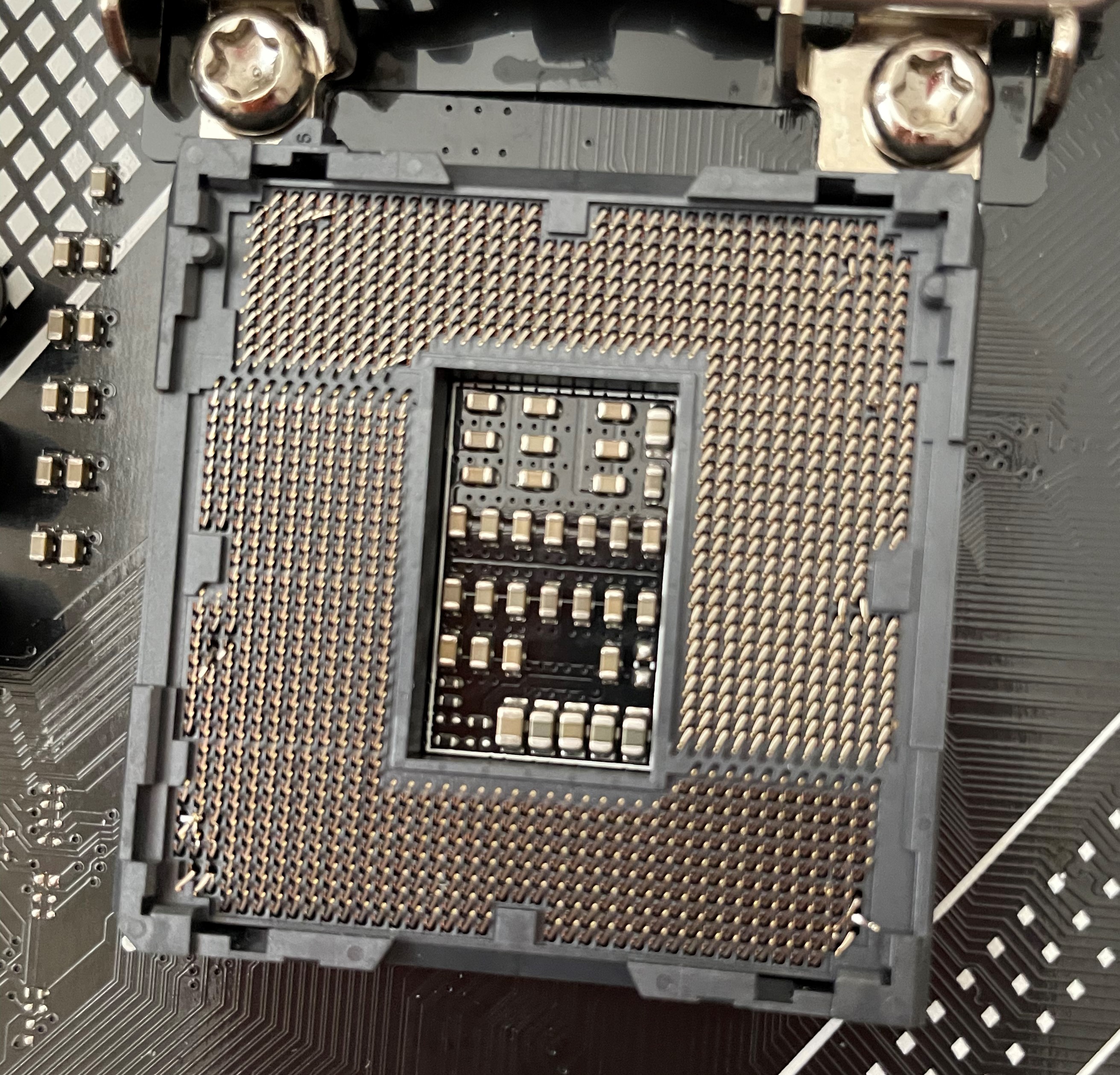 After a quick chat with an Amazon rep I had a replacement arrive the very next day. This one was brand new so now the build could continue!

For the most part this was a pretty easy build. The Corsair 4000X case was easy to work with and all the parts went in with out any issues at all. There was a tight squeeze between the top fans/radiator and the RAM, but it all went together just fine. The Corsair case has a nice cable channel in the back where most of the included cables were already ran, and i added a few more to help manage all the cables. I routed and cleaned up all the cables as best I could, but I didn't go crazy with cable management in the back as it's not visible at all, but I just wanted to make it organized for any future uprades I might make. 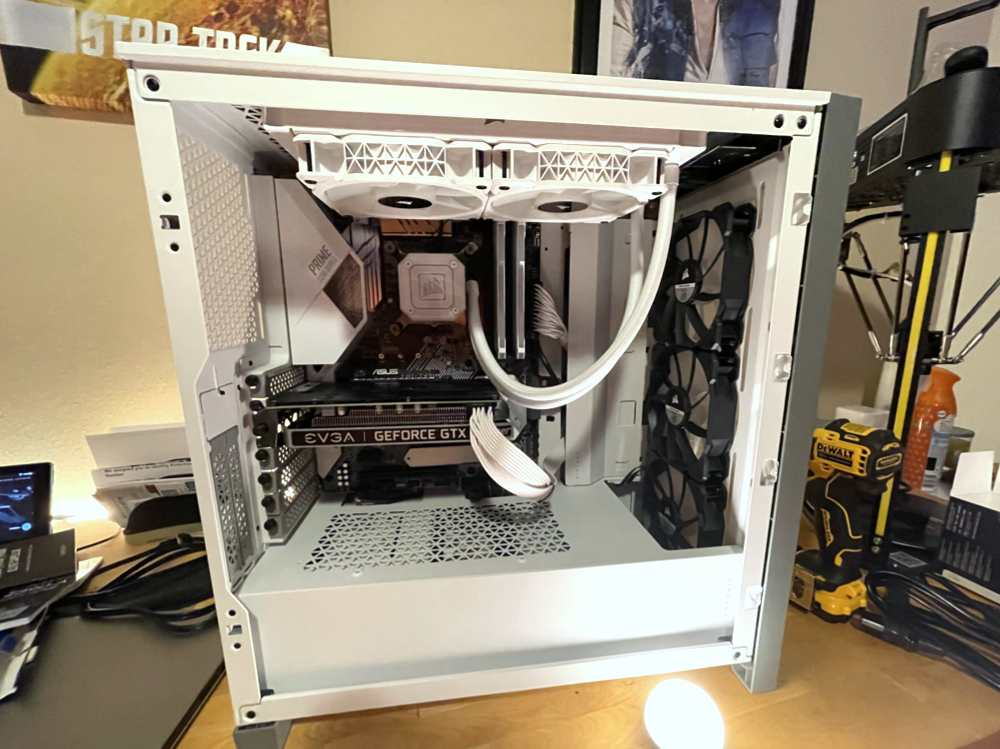 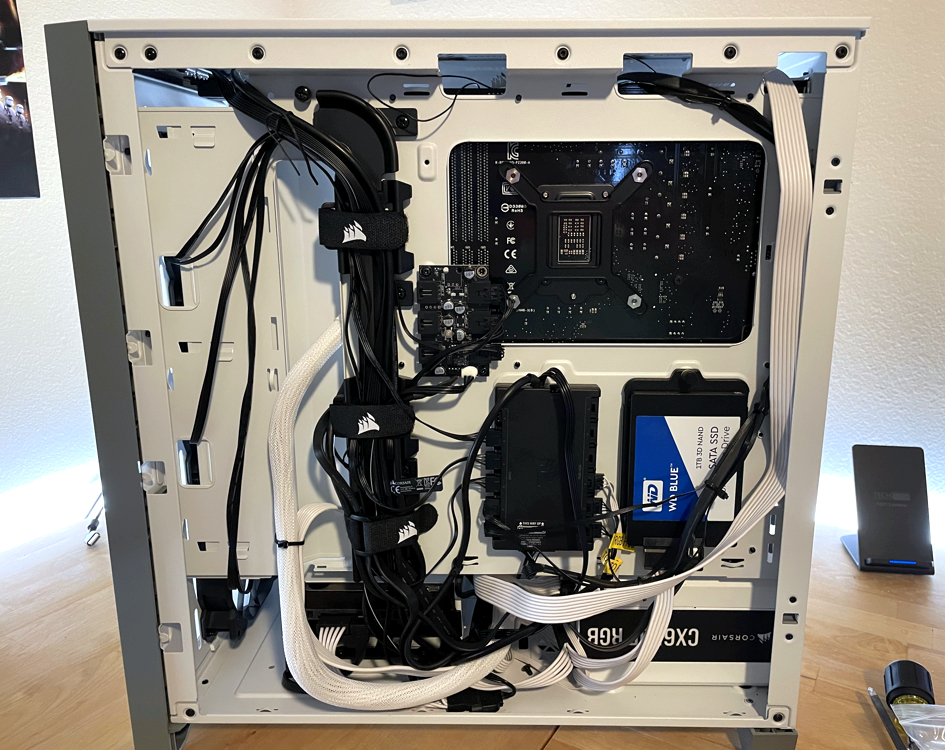 I got everything installed, double-checked all the wiring, and got the monitor and power cables all hooked up. Pressed that button, lights came on, and that's it. It didn't POST or anything. It had power and everything seemed like it was working, but I could not get it going. Thankfully this ASUS motherboard has LED status lights which will give an indication what might be wrong. The VGA and boot lights were lit so it was off to Bing to look for a solution. After just a few minutes I found a couple posts with similar issues, and what seemed like a strange solution. For whatever reason, this motherboard wants both a DisplayPort and HDMI cable plugged in at the same time.

Since I was using a DisplayPort cable already, I grabbed an HDMI from my parts box and plugged it in. And it worked. Went right to the BIOS and made sure everything was set up, and then put in my USB drive with Windows 10 on it. One more reboot and Windows was loading!

I'm incredibly happy with the build and excited to have a new PC! 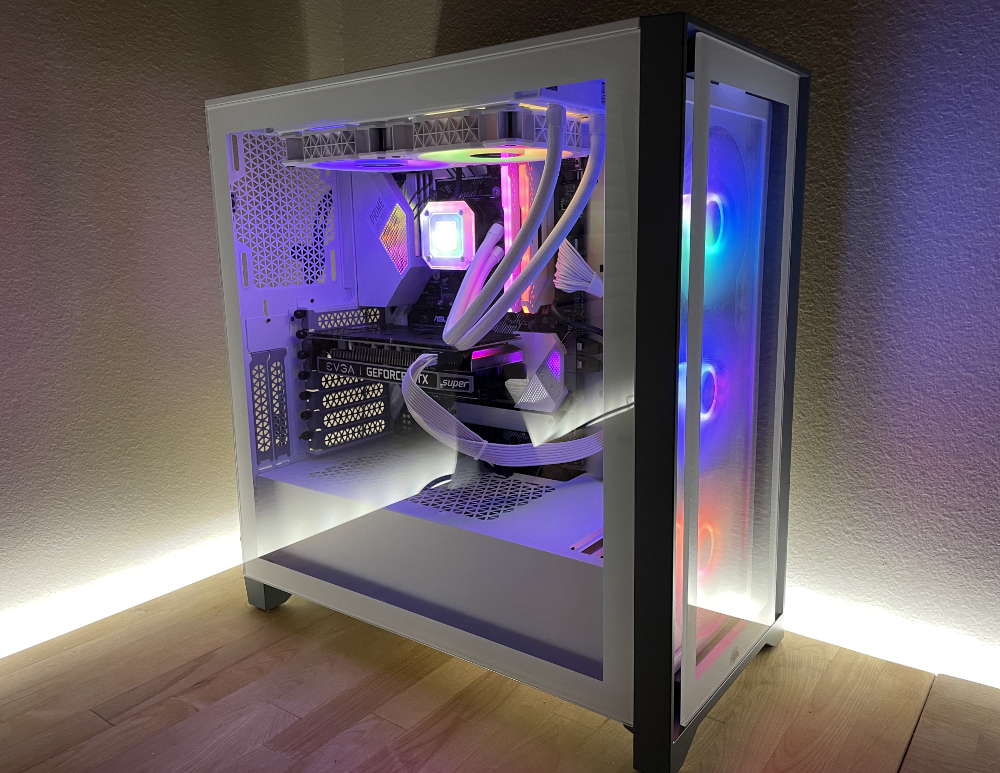 Great stuff there! Congrats, you dawg!

Pressed that button, lights came on, and that's it. It didn't POST or anything. It had power and everything seemed like it was working, but I could not get it going. Thankfully this ASUS motherboard has LED status lights which will give an indication what might be wrong. The VGA and boot lights were lit so it was off to Bing to look for a solution. After just a few minutes I found a couple posts with similar issues, and what seemed like a strange solution. For whatever reason, this motherboard wants both a DisplayPort and HDMI cable plugged in at the same time

Ah....sounds like me just a few weeks ago....lights were on but no-one was home.  Spent a lot of time trying to get past the ASUS [x99] b6 error LED...even using either/or/both cables.

This time it was the GTX980 that died.

Double fail for choosing Intel when everyone knows Ryzen is better. Cheaper as well.

I have 3 Ryzen machines [one a Threadripper 2920X] and 2 Intel Core i7s.  While I like the Ryzen machines a lot I must say that the 10th Gen i7 is also really good as well.  The 4th Gen i7 4770 is a bit old these days but still runs like a dream.  At the end of the day, I suppose it's up to the individual and what suits them best.

Talked about this build on Teams earlier but I have to say the photos show how very clean the final product is. Got to respect those cable management skills!

Ops desktop sounds like my labtop; except it is an I7, and my graphics card is not a super. Just bought it. At $1000+ a pop I will probably wait until my desktop breaks. Amd I s cheaper f your building I think, but if your buying it is not. They wanted the same price for a seventh gen amd, as they wanted for a ninth gen intel. For a new labtop. Best deal off of Amazon. Buying computers. When i was pricing desktops before it was like this. Buying not building computers. This sounds like corporations if you can’t build maybe you won’t notice cheaper amd processors.

if buying amd computers don’t come down for the same gen processors computers I will probably stick with intel. When I buy a computer I a always think will this be good down the road.

I actually like this build. This one is closer to what I have; instead of making feel like I’m back In the Stone Age. It is hard keeping up with the Jones. My contemporaries don’t understand why my coMputers are so advanced.

Not a fail at all if I got it at a great price and it works like my other Intel CPUs have for the many years I have used them.

Not a fail at all if I got it at a great price and it works like my other Intel CPUs have for the many years I have used them.

That's exactly it!  There is nothing wrong with liking either Intel or AMD, and it appears that your preference is Intel.  I am a fanboy of neither.  I have both AMD and Intel CPUs and think they're both good.  After owning AMD based PCs for several years, my first Intel unit since the Pentium days was the 4th Gen i7, and it is still going strong, so definitely no quibbles there.  My next Intel based PC is the 10th Gen i7, which is excellent.  Thing is, I also like my AMD Ryzen based machines and I can enjoy the benefits of both brands.

ID's build has different specs to mine....but the brands are pretty much identical...Intel...ASUS....Corsair...Samsung.  I tend to stick with brands I know...and have used before.  Yes, sometimes things 'fail' ...but that'll happen with any brand.

My system had a couple of 'fails' but it first booted in on 3 Jan, 2015 ...and its 'up time' was pretty much ever since, minus perhaps in total about 5 weeks total.  I run it 24/7/365, but when I went to the US [holiday] and a couple of longer weekends motor racing away from home I'd actually shut it down.

I'd imagine the typical user who might run a machine even 12 hours a day would see a life of about 12 years - which is pretty good - and by then the machine would be way out of date and be well overdue for replacing.

There's a school of thought that cycling the electrics daily actually shortens a machine's life anyway.

Running a high power PSU means almost always its fan isn't running at all, and neither does the GPU's [both only on boot], and the tower/case design is such that the others only tick over making it essentially silent.

All the platters are 'Green' which means they tend to park themselves when not accessed...so there's a bit of a lag when they spin up again...but they're really only 'storage' as all the 'immediate' stuff is on SSDs, etc.

Yeah, as I stated in the post my last build was in 2015, and the one before that was about a similar time before. I can't complain as the amount of time and use this machine gets, I certainly get my money's worth.

I built my daughter her first gaming PC last year, and used AMD for it because I got a good deal on it. You would never know the difference in real use.

I stuck with AMD because they were cheaper than the Intel counterparts back then, and not being flush with money back in those days it worked out to be more economical.  These days, though, Amd's Ryzen series is much on a par with Intel's 9th and 10th gen CPUs, which is why I purchased a 10th Gen i7-10700F at a great price.

I also have an AMD Ryzen 9 3900XT which is quite speedy and probably beats the i710700F in most things, but when it comes to video editing and conversion the i7 is the better machine.  The Threadripper 2920X beats them both, however, and is most often my go to machine.  Thing is, I won't be building anymore PCs due to cramps and arthritis in my hands, so what I've got now will have to do.

ID, congrats on the new build. I see your point and must admit that you are right. In most modern day to day computing tasks, there isn't much difference between AMD and Intel. I had me a AMD Ryzen 5 laptop last week. Sadly the SSD died and it was a brand new machine. A bit of bad luck. Now I have a dual core 11th gen Intel Celeron setup and honestly I can't see the difference in my day to day activities. Keep in mind all of my games are years old. But still, I see your point is valid, so my apologies for the comment.