hey all.. yeah im still alive.. i think...  Been working too dang much and not able to do any dx stuff or much of anything else these days.

I have a favor to ask.  I have a photo of some friends and we wanted to make it look like they had torches in their hands (some) and that the house behind them was on fire.  I have very LITTLE skill in this area, and thought that someone might be bored and want to help me out with this.

Im really trying to do this fast as its a gag for the people who's house we were in. They are out of town and we wanted to mess with them.

I know there are a lot of you that could do this pretty simply and fast (i suck at this stuff).  Just thought id throw this out to the people i thought could pull it off. 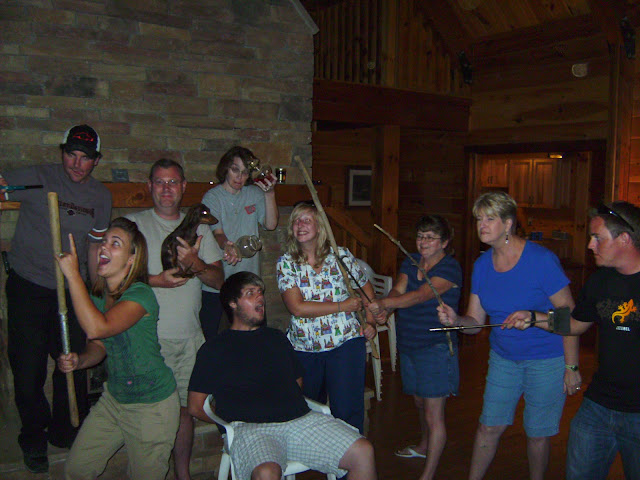 So lets see.. people with "sticks' should have "torches".. the kid in the chair needs to be "tied" up - not gaged.

The guy on the right should have a sword maybe?

Here is the link to the full sized file

I know im asking a lot.. but i just thought someone out there had the time and talent and would like to help me out.

I'm finalising Knot Aero atm...if its not too late I'll give it a whirl.

I'll be done tomorrow I hope.

I'm sure I.R. Brainiac can do better than this, but in case you need it before he gets done, it's my day off and I needed a break from what I was doing before...so, here's my quick mod for you.  [URL=http://img514.imageshack.us/i/pict1360o.jpg/]

I have some free time so I just downloaded it and I'll give it a whirl!

i decided to try it myself... what do you think:

love the rope.. cool!  thanks!

LOL, nice one RomanDA. Move the sword up in the guys hand, he's holding it wrong

Ok...guess you got it done!

I tried my hand at this project, although I didn't use Photoshop or any other raster program.

its cool thanks.. it was something i needed to do quick.. thanks all !!

These are so cool..

so.. we want to do something else next week.. any suggestions?

I'm still putting out fires from updating Knot Aero...do you still need this pic done?Looks like you had more takers than I expected.

Sorry fer being busy but I figured that at least I bumped it and somebody would come along to help.

so.. we want to do something else next week.. any suggestions?

[quote who="I.R. Brainiac" reply="13" id="2692669"]I'm still putting out fires from updating Knot Aero...do you still need this pic done?Looks like you had more takers than I expected.

Sorry fer being busy but I figured that at least I bumped it and somebody would come along to help.[/quote]

its all good, the ones here worked well.

Just trying to come up with an idea for next week.. need to top this one. LOL

k10w3, How did you do the rope effect, its perfect!

Sharks in the swimming pool? All the rooms underwater?

I've got it! Turn the place into a McDonalds!!

Really?  I didn't think mine was near as good as WebGizmos.  I used this rope brush http://browse.deviantart.com/resources/applications/psbrushes/?qh=&section=&q=rope#/d12v6lh put a bevel on it, and cast a shadow.