After a long time in the making, the SkinStudio 6 tutorial is released.  This comes at a great time, especially with the GUI  Champs ‘08 right aroun

d the corner.  This tutorial guides users through the entire process of making a WindowBlinds skin starting with descriptions of the elements of a Graphical User Interface.  It then guides you through the process of how to use SkinStudio, and how to assemble the various parts of a skin to ultimately make a complete skin.

This tutorial is aimed more at beginning users who are new to SkinStudio, or possibly thinking about creating their own skin.  SkinStudio 6 is a huge improvement over past editions, and the creation of skins is much more easier for beginners than it was in the past.  I haven’t made a full WindowBlinds skins in a while, and I was pleasantly surprised while creating this tutorial of how much better the experience was.  That’s not to say that creating a high-quality skin is easy, it still takes a lot of time planning, creating graphics, etc., but at least SkinStudio makes piecing them together much easier.

The tutorial was recently updated to reflect recent changes in SkinStudio, and to done in a format which is much easier to follow and learn from with plenty of screenshots to go along.  There is also an extensive Table of Contents, which is also linked at the bottom of every page for quick navigation between chapters.  Over the next couple of days I will post some snippets of the tutorial, just to show some highlights.  If you have been thinking about creating your own WindowBlinds skin, now is the time to start!

For more information about SkinStudio please visit www.skinstudio.net.  There is a free version of SkinStudio available, but this tutorial was created with the Pro version that is available for just $19.95, or a special Bundle that includes WindowBlinds for just $29.95.

SkinStudio is a program that allows users to create visual styles for Windows XP and Windows Vista. These visual styles are applied by the popular GUI skinning program, WindowBlinds.  A fully complete visual style will change the title bars, borders, push buttons, scrollbars, Start bar, Start menu, and virtually every other part of the Windows GUI.

SkinStudio 6 represents a complete rewrite of previous versions of SkinStudio.  The new version is designed to make it much easier for new users to get into skinning. Skinners can change as much or little of the GUI as they choose and SkinStudio will fill in the rest for them. A new skin can take a matter of minutes or weeks depending on how sophisticated the skin is. 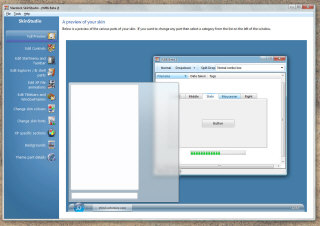 The new interface of SkinStudio 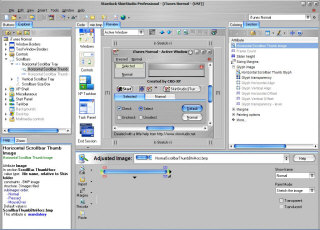 The old interface of SkinStudio

SkinStudio 6 takes on a much more task-oriented design.  Rather than the user being overwhelmed with information by seeing all elements of the visual style at once, SkinStudio 6 instead takes the user step by step through the skin. 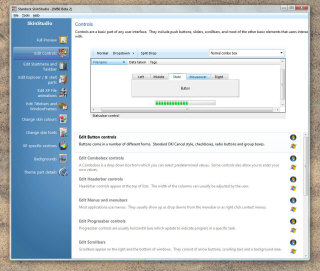 Each element shows either (or both) a Windows XP logo or a Windows Vista logo to let the skin author know which features are supported under which operating system.  Moreover, when editing a particular element, the interface is clean and to the point. 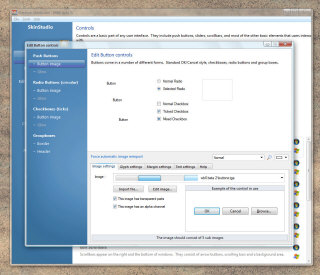 What can and can't be changed is very straight forward.

Moreover, each section will be tied to a particular part of the SkinStudio portion of the Customization Wiki. In this way, users can instantly get help making skins from not just Stardock but the entire skinning community. 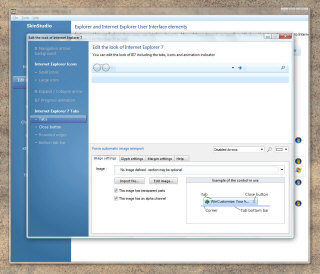 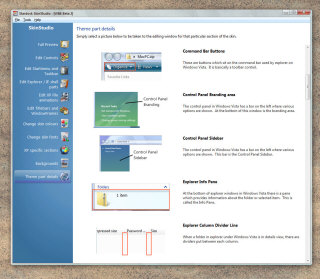 SkinStudio 6 is being designed with the upcoming WindowBlinds 6 in mind. All the new Windows Vista controls, Internet Explorer 7 controls and more will be easily editable. No more trying to figure out how to support the latest/greatest features. 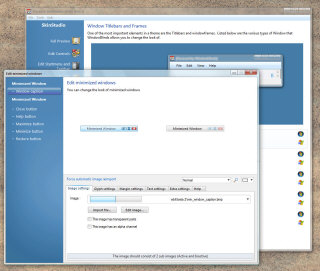 Elements available to be skinned are now easily accessible

One of the most common complaints about WindowBlinds skins is that many skins didn't support many of the features.  This was often because the previous SkinStudio was designed at at time when WindowBlinds was much simpler and as more features were added, the newer features began to get buried in the UI.  The new SkinStudio design makes these new features much more accessible.

We're going to need your help

Because SkinStudio 6 is such a radical departure from the existing SkinStudio design, we are going to need a lot of feedback on this.  SkinStudio 6 will be available in beta form on Object Desktop on July 18th (2007).