First Astronauts Launched to Space Station from U.S. Since 2011

Wednesday, May 27, 2020 by Tatiora | Discussion: Life, the Universe and Everything 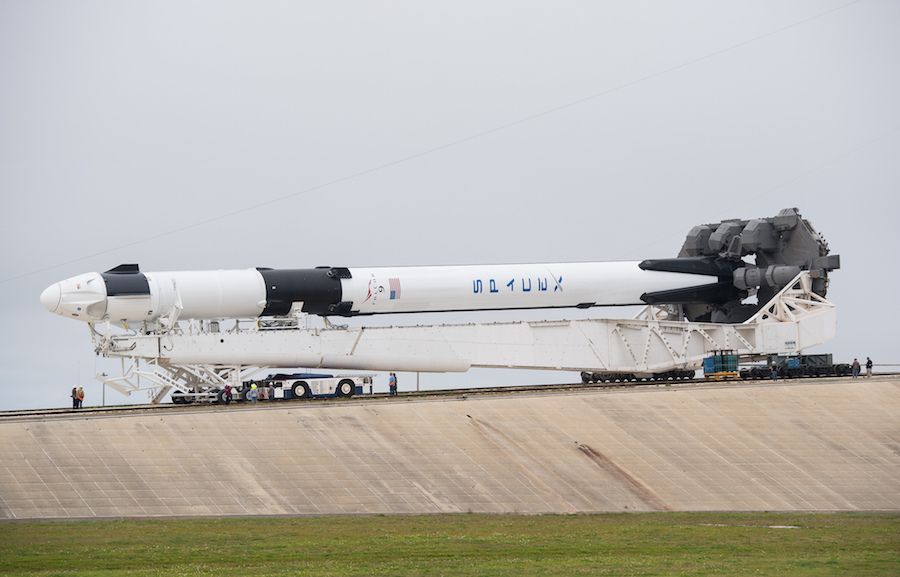 The Falcon 9 rocket and Crew Dragon spacecraft roll to pad 39A during its first test flight in February. Credit: NASA/Joel Kowsky

Today, American astronauts will launch on a rocket from American soil to the International Space Station, marking a new era of human spaceflight. NASA astronauts Robert Behnken and Douglas Hurley, chosen for their experience on several previous missions on the space shuttle and extensive test pilot and flight experience, will fly on SpaceX’s Crew Dragon spacecraft, lifting off on a Falcon 9 rocket at 4:33 p.m. EDT May 26th from Launch Complex 39A in Florida. The astronauts will remain on the International Space Station for an extended stay for the Demo-2 mission.

This historic moment has been a decade in the making thanks to a groundbreaking public-private partnership that finally returns the United States to the business of human spaceflight for the first time since NASA's space shuttle fleet retired 2011. After successfully docking, Behnken and Hurley will be welcomed aboard station and will become members of the Expedition 63 crew. They will perform tests on Crew Dragon, which was built by Elon Musk's SpaceX company and funded by the US government under the Commercial Crew Program.

According to NASA's website for the mission: "Lifting off from Launch Pad 39A atop a specially instrumented Falcon 9 rocket, Crew Dragon will accelerate its two passengers to approximately 17,000 mph and put it on an intercept course with the International Space Station. Once in orbit, the crew and SpaceX mission control will verify the spacecraft is performing as intended by testing the environmental control system, the displays and control system and the maneuvering thrusters, among other things. In about 24 hours, Crew Dragon will be in position to rendezvous and dock with the space station. The spacecraft is designed to do this autonomously but astronauts aboard the spacecraft and the station will be diligently monitoring approach and docking and can take control of the spacecraft if necessary."

The Demo-2 mission will validate the company’s crew transportation system, including the launch pad, rocket, spacecraft, and operational capabilities. This also will be the first time NASA astronauts will test the spacecraft systems in orbit. The mission website also states that, "This certification and regular operation of Crew Dragon will enable NASA to continue the important research and technology investigations taking place onboard the station, which benefits people on Earth and lays the groundwork for future exploration of the Moon and Mars starting with the agency’s Artemis program, which will land the first woman and the next man on the lunar surface in 2024."

Want to watch the launch? You can see it live here on NASA's YouTube channel, plus visit their website to see what other upcoming events might be worth watching. Share your thoughts in the comments below!

Sadly due to weather conditions they had to abort. Looks like they will try again in 3 days.