WindowBlinds skin formats: The right tool for the right job

WindowBlinds is the engine.

UIS1 and UIS2 were the two skin formats WindowBlinds has supported.  UIS1 for “simple” skins and UIS2 for complex skins.

Both were designed in an age where few people wanted their systems to resemble Windows classic let alone Luna (the Windows XP look) .

Windows Vista’s Aero changed that.  Because (like me) think Aero looks good.  But Microsoft severely limited the customization options of Aero for reasons most of us can’t fathom.

But we skinners only has UIS1 and UIS2 skin formats. 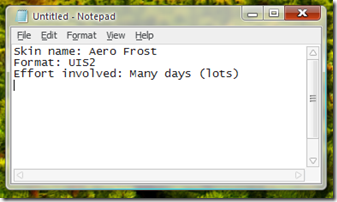 If making an Aero like skin required lots of work, then skinners might as well spend that same amount of time to make something truly original right? 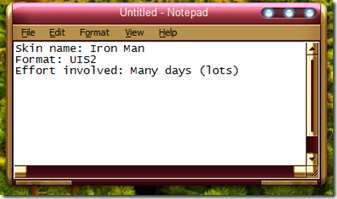 As a result, nearly all the Aero-like skins were designed by Stardock because skinners didn’t want to spend a ton of hours to make a skin that simply looked slightly different from Aero.

Unfortunately for skinning, LOTS of users wanted looks that were just a bit different from Aero.

This is why the new skin format in WindowBlinds 7 is such a big deal. 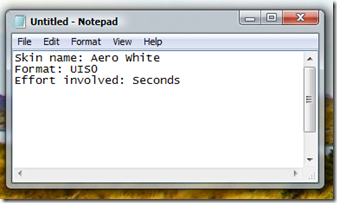 Of course, there are color options in Aero but you have no choice but to deal with the default weird texture and other behaviors that you’re still stuck with regardless of the transparency. 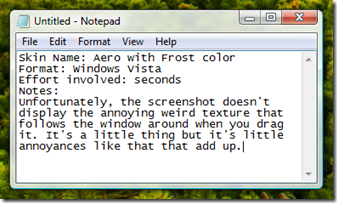 But because of all the effort involved in making a traditional WindowBlinds skin, that meant that previously, no one would make simple Aero skins like the one below that can now be done in seconds from within the WindowBlinds configuration interface that are obviously not possible with what’s built into Windows. 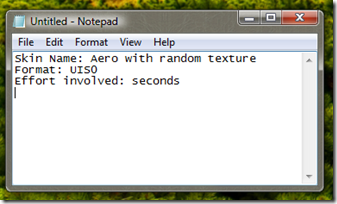 WindowBlinds 7 comes out in early November. Object Desktop users can do this now though.

mickeko
Reply #1 Monday, November 2, 2009 8:23 AM
I was thinking hard about how to reply to this post... But the only thing I managed to come up with was something about as basic as UIS0: Yes.

Sorry, but while UIS0 may be a great feature for some people, I'll pass and stick to creating skins that don't all look the same.  Aero is Aero, transparency is transparency.  Does not matter what you do to them, they still look the same.  First thing I do on a fresh OS install is get rid of anything Aero or anything that even looks close to it.  UIS2 (without transparency) is the way!

I can't find a decent tutorial for any of the options.

I don't want to mess with the Aero stuff. I want to make totally original skins. All of this is quite frustrating to keep up with.

I do appreciate the choices and the work that goes into all of this, I just wish I understood better how to apply them or use them to begin with.

Not a skinner but I kind of like folks making new and different skins and not just recoloring Aero.  Lots of nice WB themes being done and I hope it continues to happen.

No matter how easy you may make it to make skins, I have neither the talent, skills or the desire to start learning.  There are just so many great skinners in the commuity that anything I would do just wouldn't be good enough.

So, we have 3 levels of skinning to choose from:

If you don't do your own skins, you don't even need to know this much... You can just browse screenshots and install whatever skin you like the look of.

I don't see how that is confusing?

I prefer UIS2 when creating skins, not that I do it often any more.  It's a challenging & fun hobby, but takes frikkin' forever to get the image details right and to skin all the infrequently exposed UI elements, with too many different image requirements for seemingly similar UI elements being one of the big drawbacks.  There are also all the odd MS quirks to work around, some of them amounting to a single pixel offset in image placement.  The number of individual images you have to develop to achieve a good result is crazy big now, without even talking about the animations & toolbar icons.  Even then, there are too many 'limitations' courtesy of MS to make a skin with a truly consistent look throughout the UI, unless that's changed with Win7 & from what I've heard, that's not the case - still stuff you can't touch, or if you do it looks wrong.

I still enjoy it but it takes a helluva lot longer to finish a skin these days.

I don't envy you anymore, John.