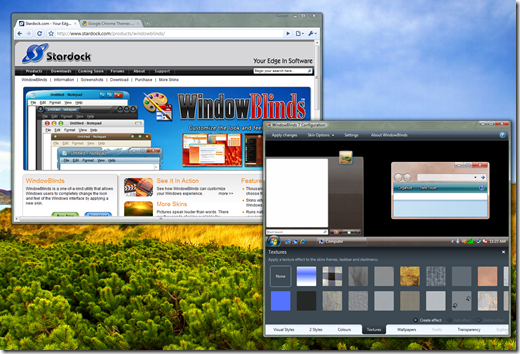 Alas, Poor Skinning. I knew him…

Or so it seemed.  Skinning was huge for awhile. And then it wasn’t.

I’ll tell you: Windows stopped being so ugly and there was no easy way to simply customize Aero(the default glass look of Windows Vista and Windows 7).

In the years since Windows Vista, if you wanted to have say a metallic version of the Windows Vista UI, a skinner had to spend as much time making that (i.e. many days) as it would take to create something outrageous. And so, most skinners chose outrageous because let’s face it, people don’t appreciate the amount of effort it takes to make a subtle change.

And so skinning returned to the niche it was prior to Windows XP’s release.

WindowBlinds 7 changes that.  Of course, it still supports all manner of total Windows makeovers. But WindowBlinds 7 also supports skinning Aero itself. That means no worries about compatibility, performance, or memory because it’s still Aero.  And, best of all, the effort involved is dramatically less.

WindowBlinds 7 is due out in early November for everyone but if you have Object Desktop, you can play with the late betas now.

Brad....about the only thing I can think of that would top this is a handheld version for everything else in the household!

This has and always will be one the best things I ever downloaded for my pc!

With the ease with which the subtle changes can be made now, outrageous is going to go out of style.  Ever since I started playing with the new features in WB7, I've had this vague, sad, melancholy feeling that stunning, smack-me-on-my-ass skins aren't going to be created anymore.  Even before WB7 betas were released, the trend was for more and more minimalist skins.  There is a limit on how many ways a skinner can create a dark, shiny, flat skin.

OK, I understand that IS the "little black dress," the tasteful base that gets highlighted with a few small flashy accessories, but the flamboyant kid in me is starting to get the hint that the rest of the class has grown up, completely satisfied with their sleek new life, and I'm left pining away for the days of rainbow colored blocks and circus tents.

I hate to ask this question Brad, but will Windowblinds 7 work with no issues that you know of on XP, Vista and Win7?  Will all texturing abilities and such work on all three OS's?

Thanks Brad.  I do have a problem with apply textures in Windows XP Professional 32-bit though.  If I apply a texture, it works fine, but when I set the texture back to none and apply, it totally messes up color wise, and any skin I apply after that is messed up also.  The only way I have found to fix it is to either reboot, or apply the Windows Classic theme, and then apply a WB skin and all is well.  My info is:

Just thought you might want to know.  Love WB7 though!

Nice! I've never really been about outrageous stuff. I tried the Stardock Dragon skin for a while but I just went back to something more basic. Right now, I'm using Diamond on my desktop and I don't see myself changing anytime soon.

CCdeQueen
Reply #7 Monday, November 2, 2009 1:35 PM
[quote]I'm left pining away for the days of rainbow colored blocks and circus tents. Absolutely! All this dark minimalist stuff is beginning to bore me senseless. What is the point of customization if every skin looks the same?

BoXXi
Reply #8 Monday, November 2, 2009 2:07 PM
All this dark minimalist stuff is beginning to bore me senseless

CountryYokel
Reply #10 Monday, November 2, 2009 3:50 PM
There is a limit on how many ways a skinner can create a dark, shiny, flat skin.
All this dark minimalist stuff is beginning to bore me senseless
What is the point of customization if every skin looks the same?
Completely agree, but you only have to look at the downloads to see that this is what most people seem to want & the new features in WindowBlinds 7 will certainly cater for what the market wants, & is the logical direction for Stardock to move forward. Having said that I will not be following, I do not do outrageous, but I like to skin a bit differently, because, to me, that is part of the challenge of skinning & I will continue to do so, because that is what I enjoy.

LightStar
Reply #11 Monday, November 2, 2009 3:51 PM
What is the point of customization if every skin looks the same?
I am in total agreement with BoXXi on that one!

After struggling with this for a while I've decided I'll just keep skinning the way I skin (which is the way I want my desktop to look, following my muses), and if my skins don't get a lot of downloads and I never make Journeyman, I'm just going to have to suck it up, because I don't do this to be popular (although knowing others enjoy my skins DOES feed my ego); I do it because it makes me whole.  It gives me a reason to get up in the morning and it helps me sleep better at night.  Everything else is just a gift.

well i like all the skins and the dark ones arent all the same..take a look at them side by side...not the same at all...different aspects make each skin unique and cool to look at...just my 2 cents

Just purchased Object Desktop Ultimate.  I really like the direction Stardock is taking with it and that extra year made it a great value.  Window Blinds 7 is GREAT!  I was having a problem with Diamond for awhile but it's working fine now.  I am playing with some of the other programs too but Window Blinds and Skin Studio are still my favorites and now I get to play with the latest Skin Studio beta too.  So far no issues with it at all.

At least having WB doing this will stop people creating zillions of Aero clones...

And I will continue to make Windows look the way I want it to...