For years now, a WinCustomize subscription primarily allowed you to browse the site completely ad-free, gave you fully access to the Skin Browser, and every now and then a free skin from Stardock.  In recent months, we've been talking about how to change the site subscription model to make it a better value to users, with the goal obviously to encourage more people to subscribe and support the site.

So today I'm happy to announce a transformation in the WinCustomize Subscription plan.  With Object Desktop, you get a year of software updates to some great skinning applications, but what about content?  To answer that, from today forward, a WinCustomize subscription will give you access to twelve free Stardock Design skins a year!*

Our first free skin to subscribers comes from one of the most respected and talented skinners in the community: adni18.  Stardust is a killer WindowBlinds skin that gives your desktop a modern & flashy look without being distracting or annoying.  Glassy edges, cool colors and attention to detail make this a skin every WindowBlinds user needs to run. 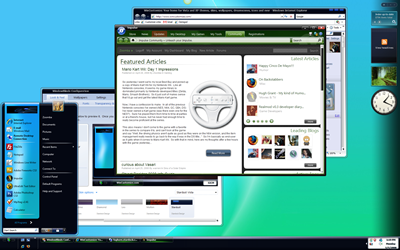 Subscribers can grab the skin from the Subscriber Resources page (must be logged in).

Because we are now offering $60 in free skins a year, the pricing of the WinCustomize Subscription is changing.  Effective immediately, a WinCustomize subscription costs $29.95 per year and you'll renew on a year-to-year basis (i.e. no more 2 year renewals).  You will receive all the old benefits of a WC Subscription, only now for $10 extra you're getting $60 in skins.

Don't have a subscription yet period?  Well, we're working on some bundle packs for new users.

Currently, if you buy WindowBlinds Extreme, you can get WindowBlinds plus a WinCustomize Subscription for $39.95 (a $10 discount on the first year of a WC subscription).

We are working on a similar bundle for Object Desktop.  Expect more info on that when it's ready.

Now, I'm sure everyone has questions about what this change means for them.  Let me quickly cover the high points...

If there are any other questions about the new subscription plan, let me know either in a comment or via PM.

*a year is a calendar year, January 1st to December 31st.  Because this plan is launching in May of 2008, the 2008 skin set may fall short of the 12 target by December

Thanks to SD/WinCustomize for these free subscriber skins, too!

Thanks for the new subscription format!

warreni
Reply #10 Tuesday, May 6, 2008 12:01 PM
Zoomba said: So, I'll be the cheap bugger to ask this question: if you are an ODNT subscriber and a WC subscriber, do you get multiple discounts on the MyColors themes that have Subscriber Skins as a component?

I doubt you get double discounts on a theme

Philly0381
Reply #12 Tuesday, May 6, 2008 12:07 PM
So, I'll be the cheap bugger to ask this question: if you are an ODNT subscriber and a WC subscriber, do you get multiple discounts on the MyColors themes that have Subscriber Skins as a component?

warreni the only way a question gets a chance to be answered is if it's asked.

You do know that you just made someone hit their forehead with the palm of the hand!

There is already a discount for ODNT subscribers buying a full MyColors theme, will the Wincustomize subcriber discount be the same amount on these new themes that are built around a Subscriber resources skin or will it be a larger discount since people already have the Windowblind skin and are buying the remainder of the theme?

Zoomba
Reply #17 Tuesday, May 6, 2008 12:43 PM
The pricing for the Subscriber discount isn't final yet, but I'd bet it would be very close to, if not the same as the ODNT discount since people could be purchasing these that only own WindowBlinds and not the rest of ODNT.

angus1949
Reply #18 Tuesday, May 6, 2008 12:49 PM
I wish I had extended it even longer now.
So do I, but I bet if this had leaked out there would have been rush on renewals that would have jammed the servers for days.

That was a terrible Homer Simpson...

yeah......reminded me more of Capt. Binghamton from McHale's Navy.....

Zoomba
Reply #20 Tuesday, May 6, 2008 12:57 PM
Like I said in the podcast yesterday, some folks were already subscribed out to 2017.  A handful of you made out like bandits on this change