I have to admit, I'm pretty excited about SkinStudio 6. Which is surprising in some respects because I was deeply involved in the design of SkinStudio 1 through 5.  With SkinStudio 6, the WindowBlinds team wrote it with my part being mostly that of providing input rather than design direction.

SkinStudio 1 through 5 was designed to provide a quasi-Corel Draw style user interface.  The design worked out well in the early days when WindowBlinds wasn't that powerful. 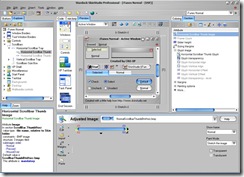 As you can see, it got pretty complicated by version 6. 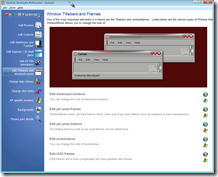 The difference is application designer versus task oriented design.  That is, with SkinStudio 6, the skinner simply walks through a series of steps and at the end has a finished skin.

How this will affect the skinning community remains to be seen. But we now have a way for people to easily make their own skins. And best of all, SkinStudio is FREE.

Other than that (from my non-skinning perspective) worlds better.

Could you offer either context, or an example of a WB in which they are used? Tks.

The blind(s) I'm working on now have thus far been skinned entirely with v6. The program just gets better with every update

Time to start on Vista versions of your stuff.

I for one would like to see Knot Vista for Vista.

victory99
Reply #7 Tuesday, March 25, 2008 9:02 PM
I'm impressed with this release. I appreciate all the hard work the developers put into the rewrite. They've succeeded in making the program less intimidating than the previous versions. For someone like myself who would like to attempt my first windowblind, it seems to be more user-friendly. I'm looking forward to giving it a try. Thank you Stardock!