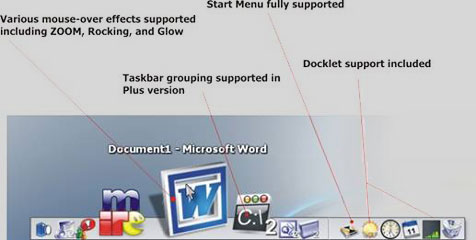 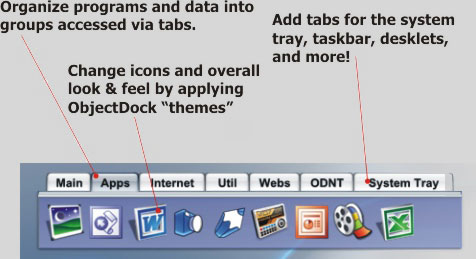 A ton of new features have been added to ObjectDock 1.5. This includes:

ObjectDock has two types of docks. The standard dock is essentially a single "tray" or "wharf" that can hold short-cuts, running tasks, docklets, and system tray items.  The other type of dock, the "Plus" type, is the tabbed dock. The following section discusses the standard dock.

At a basic level, ObjectDock is simply a container for desktop items. It's been designed to be as flexible as possible to enable users to easily drag and drop their programs and documents onto it. It is also very flexible in enabling users customize the way it looks and feels. 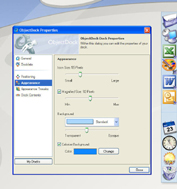 ObjectDock supports more than just programs and running tasks, it also supports "docklets". These are mini-applications that reside on the dock and are created by third parties. There are docklets for telling you the weather, your email status, network traffic, CPU usage, memory usage, clock, Wi-Fi connection strength, calendar, and much more.  Docklets let users add useful information to their docks.

Docks can be vertical (such as in this screenshot) or horizontal, on the top or bottom of the screen. They can be aligned to the middle of the screen or to the left or right. Version 1.3 also adds the ability to have the dock offset from the edge of the screen (both free and Plus versions). The background (skin) of the dock can easily be changed with hundreds of additional skins available on-line to make your dock appear as anything you'd like it to be.

Another popular feature of ObjectDock is the ability to have the icons grow on mouse-over.  When the mouse is moved over a given icon on the dock, it starts to grow.

This effect can be a "narrow" effect or a "wide" effect to determine how many near-by icons are affected by the mouse over. 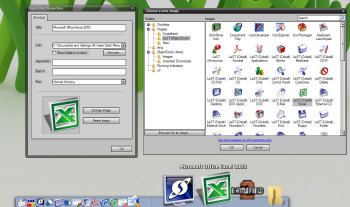 A minor but key feature of ObjectDock is its ability to allow you to change the icons of items on the dock. Since many icons don't look good when enlarged, ObjectDock enables users to replace those icons with either other icon files or .PNG files. The popular customization site, WinCustomize.com, includes thousands of replacement icons for virtually every program out there. 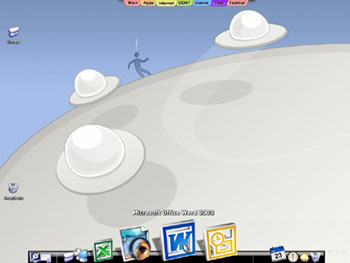 ObjectDock can hide the Windows Start bar if the user chooses and take over all of its functionality. (ObjectDock Plus supports taskbar grouping and system tray items as well.) 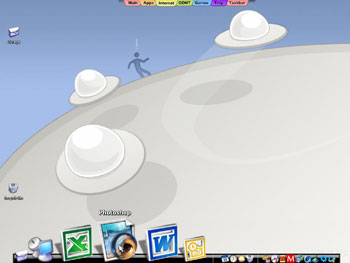 ObjectDock Plus feature: System tray (see on the right of the dock). Hold down the mouse button on a system tray item for a few seconds to change the appearance of its icon.

ObjectDock Plus includes all of the features of the free dock, but adds other features including the ability to have customizable tabs on your dock, which allows for even greater organization and control over your desktop.

Different docks can be organized in different ways, and tabbed docks can be docked to an edge of the screen to display just the tabbed dock. When the tabs are docked to the edge you can choose to have them show up on top or activate with a hotspot. What can't be shown in a mere screenshot is just how good the usability of ObjectDock is. Drag a dock to the edge and it'll automatically dock. Move it off and it'll undock. It works intuitively and easily. 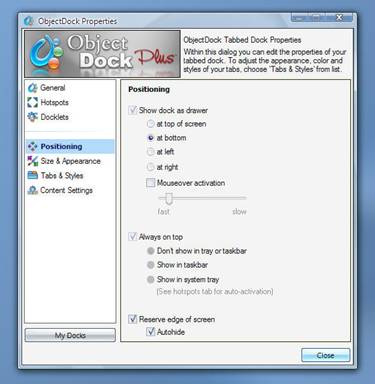 When used properly, tabbed docks can enable users to organize their desktops in truly remarkable ways.

Because the tabs can be made any size the user wants, the user could have color coded tabs that have no text. Or they could simply have hot spots that activate various docks on mouse-over.  The hot spots are intelligent enough that the user can set how long the mouse must linger on that hotspot before activating the dock. This is a major usability feature that ObjectDock Plus has going for it. 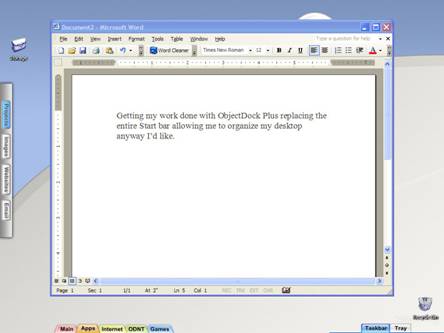 The tabbed docks are incredibly powerful when combined with the ability to have multiple docks on the desktop.

Dangerousdaze
Reply #5 Wednesday, November 22, 2006 6:18 PM
Did we get a Dock equivalent of BandVWM (Virtual Desktops) yet? Without that I can never throw out the standard Taskbar.

I ask for it every version, so, here's the request again.

Your question was answered in your other post prior to posting here: