Coming to a desktop near you

DesktopX is a program that lets users build their own desktops.  It does this by giving users access to desktop objects. These objects can come in all sizes and shapes. They can have scripts attached to them, they can be combined together to form mini applications or turned into an entire desktop.

A new way of looking at the desktop

Let's take a look at a typical desktop. For this example, we'll use Windows Vista but it could just as easily be Windows XP. 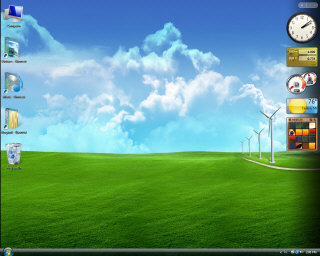 When DesktopX is first loaded, it provides 4 primary options: 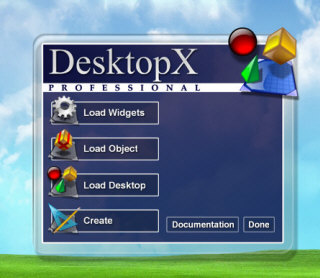 This menu lets the user decide whether they want to load an existing creation (widgets, objects, and desktops) or create their own.  For our purposes, we'll go with create.

DesktopX appears in the system tray

From the system tray, users can now create a new object which will appear on the desktop like this:

An object on the desktop

This object can be made into almost anything the user wants.  Let's look at a couple simple examples:

Making an object into a glorified desktop icon:

DesktopX objects can be turned into fancy desktop icons easily. They have the advantage of being sized however the user wants. Just right-click on the object and choose properties: 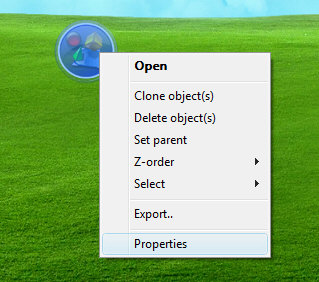 From there, a dialog comes up in which users can choose what they want the object to appear like. Users can use .PNG image files (or .BMP or even .ICO) to change the image.  By selecting a new image, the user can see this: 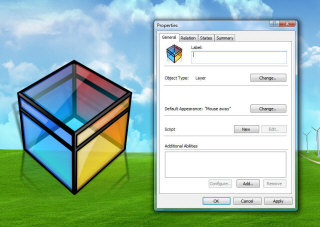 The size of the image can be controlled by the summary page. 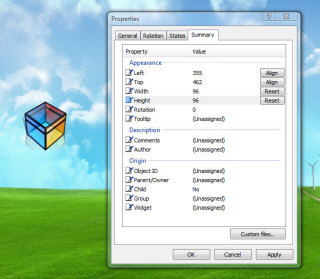 The object can be resized right from the summary page.

Now I just have it point to whatever program or website I want. In this case, I'll have it open WinCustomize.com.

And Voila I have a really fancy desktop icon.

Making my object into a widget/gadget

Technically speaking, objects are widgets/gadgets.  The difference is one of format.  When you have finished, you can take your creation and save it as an object pack which simply saves the raw data to be imported back into your desktop or you can save it as a widget which turns it into a program (.EXE).  If you have DesktopX PRO, you can also save as a gadget which turns it into a program that can run on any Windows XP, 2000, or Vista machine without requiring DesktopX to be installed.

What's new in DesktopX 3.5 in this area is that users can also export their works as Windows Sidebar gadgets.  The Pro version will turn them into stand-alone sidebar gadgets.

Let's create a simple widget.  First, we start back with our object.  I'm going to us images and script provided by David A. Roman for this example. 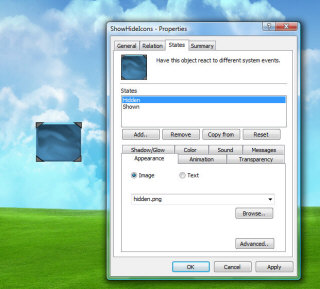 This object has two states

For each state, I provide an image.

The next step is to write some VB Script (or JavaScript). 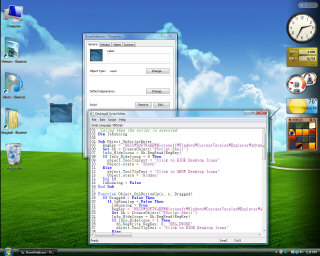 This script is obviously more advanced that what a beginner would create but I wanted to show something that was fairly useful and it's only 67 lines even with spaces and comments.  What it does is react to being clicked on. If the icons are showing, it tells Windows to hide desktop icons. If the icons are already hidden, it tells Windows to show them.

Turning it into a Windows Sidebar Gadget!

When I'm done with my object and have made sure it does as I ask, I can export it as a Windows Sidebar Gadget: 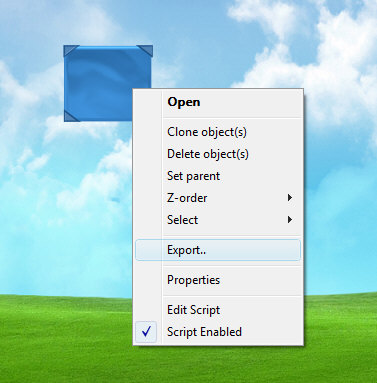 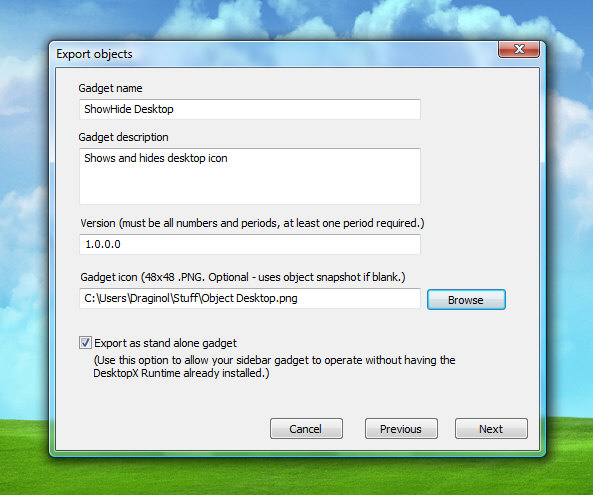 Since I have DesktopX Pro, I can export it as a stand-alone sidebar gadget (otherwise, the user needs to have the DesktopX run-times installed). 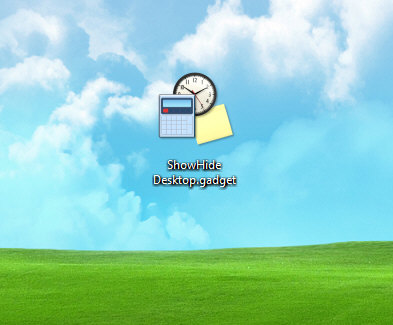 And there it is. the .gadget file 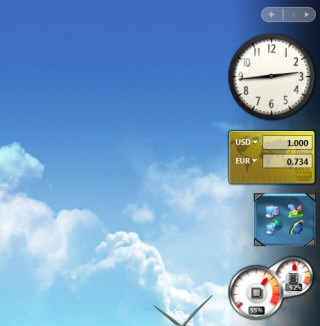 The advantage of DesktopX for making Sidebar gadgets is that DesktopX has a much larger library of APIs to call on and is a visually oriented development platform for gadget makers.  Something as simple as a show/hide desktop icons toggle isn't very easy to make as a Sidebar gadget. But with DesktopX, it's a snap.

So far, we've really only scratched the surface of what DesktopX can do.  DesktopX can create widgets & gadgets. But these days, there's a gazillion different gadget/widget creation tools (though DesktopX is probably the most powerful one currently available).

DesktopX doesn't stop at being able to make mini-applications. Users can build an entire desktop and then save it as a .desktop file to distribute out.  It's a lot like making a widget except on a much larger scale. 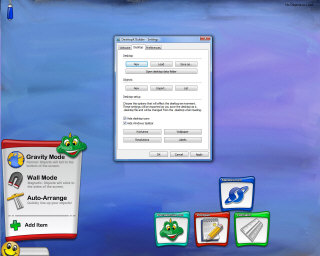 In this example, objects have been grouped together and also given scripts to allow for the creation of new objects: 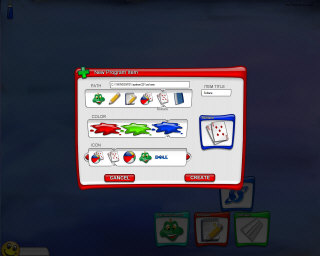 A replacement desktop created with DesktopX

Since objects can be created by other objects with all their key properties assigned by other objects, users can literally construct their own Windows environment with DesktopX -- in a fraction of the time it would take to write ones own shell. 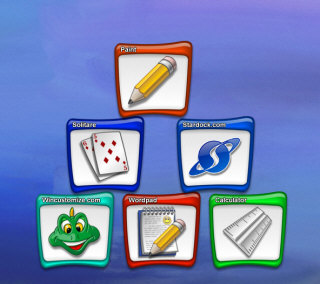 DesktopX can even give objects "hit detection"

When done, a user can simply export their creation as a .desktop file and anyone who has the DesktopX run-times installed can use it.

This Play-ground theme will be coming with DesktopX 3.5.

Users who want to get DesktopX Pro can get it for $69.95 and that adds the ability to export stand-alone programs and Sidebar gadgets.

Have the performance meters been fixed for Vista?
C) Can we PLEASE have a correct build of Ani-Util?
D) I love DX. I have for years. Has anything been done to make this more stable when building themes/objects?
E) Systray objects are also very very fickle. Many times they just don't work, probably due to sdmcp issues. Has this been addressed?

In any case. I look forward to the release.

WIll have to check

c) Will have to check into that, don't use Ani-Util.

e) Moving SDMCP into a new system, not sure if this will make it into DesktopX. SDMCP is going to go away.

Have not tried to move things over to Sidebar Gadgets, but i will be working on making some of my more requested over. Im working on a replacement for the File Transporter using an ActiveX dll that will allow me to bypass the command line FTP the current one is using. I think I have to move more to Vista to see what i can do with DX. There are a lot of things that would be great to make as a sidebar.

Thanks for the inclusion in the article.

There are several bugs/issues in DX 3.49b[b].008 That REALLY need addressed, most of these have been brought up in the irc channel as well as in some emails. Im looking forward to seeing what happens with V4 and skinable widgets!

I agree DX is very underrated and under utilized, the amount of things its capable of are astounding. Im trying to work on some more things that we have not seen 1000 of, but time is something that makes this harder, and im also not the best coder, im just avg, so i struggle with making things clean.

Keep up the great work on DX and the other OD products!!

IMO Skinable widgets will be the most significant advance in widgets of late & put Stardocks' DesktopX back in the lead.

I agree DX is very underrated and under utilized, the amount of things its capable of are astounding.

Definitely, agree with this. Sadly I have at least a dozen or so apps that could easily be done in DX. So many widget ideas, so little time.

Email me.. lets work on these!!

I saw comment above stating something about version 4? Is 3.5 going to ship or will you all jump straight to 4?


When will we get a better manual on writing widgets? The tutorials that exist are "OK" - but not in the least bit comprehensive and the help available is basically for version 1.x? Maybe a little later, but still not very helpful (at least to me).

I'd really like to see a good manual and some really good examples on putting the whole thing together.

SirSmiley
Reply #9 Thursday, November 29, 2007 4:35 PM
I don't know what documentation you're talking about but, the current documentation is at least for 3.0 or greater Stardock DesktopX Documentation.

I'd really like to see a good manual and some really good examples on putting the whole thing together.

As for a better manual the documentation is pretty detailed and comparable to other SDK's. As for tutorials there's lot's within the DesktopX Tutorial forum that cover the basics, the wiki, and Brad (aka Frogboy) not to mention others did a number of articles that are still relevant.

Could you be a little more detailed about "good examples on putting the whole thing together"? IMO that's very subjective. Take a look at the code or structure of some of the higher rated objects, widgets and themes.

BillW
Reply #10 Tuesday, January 22, 2008 5:20 PM
How about the actual release? I renewed my Object Desktop subscription because the email I got said that all new versions were coming out "any day now" (don't exactly recall when they said, but it implied shortly) - that was back in September.

I've been hearing about DesktopX 3.5 for quite some time and ObjectDock still hasn't been updated since October.

I too saw something about version 4 of DesktopX - does that mean 3.5 is not happening and when is v4 going to be released?

Do we get our subscriptions extended because it's taking so long to get these products out the door?

seppchen
Reply #11 Wednesday, January 30, 2008 5:19 AM
Stardock should come quickly with a new DesktopX release and if possible one that works under Windows Vista SP1