Stardock released WindowBlinds 5.5 today.  WindowBlinds is a program that enables users to customize the look and feel of the graphical user interface of Microsoft Windows.  By applying "skins", WindowBlinds can change title bars, borders, push buttons, scroll bars, the taskbar, the Start menu and virtually every element of the Windows environment.  Thousands of different skins exist and can be created using a free program called SkinStudio.

For Windows Vista users, WindowBlinds 5.5 makes use of the new hardware accelerated Desktop Window Manager (DWM) to ensure the highest level of performance.   WindowBlinds 5.5 also skins the client controls of "non theme aware" programs on both Windows XP and Windows Vista so that users get a consistent look and feel across all their applications.

WindowBlinds has over 12 million downloads at CNET's Download.com and is, by far, the most popular desktop enhancement program of all time. It has also been licensed by companies looking to deliver their own branded looks to the desktop including Microsoft, Nintendo, ATI, nVidia, Ziff-Davis, Blizzard, and more.

Users can download WindowBlinds 5.5 directly from the newly re-designed WindowBlinds.net website.  The enhanced registered version is $19.95 or can be purchased as part of Object Desktop, Stardock's flagship suite of desktop enhancement programs which includes IconPackager, DesktopX, ObjectBar, DeskScapes, LogonStudio Vista, and more. 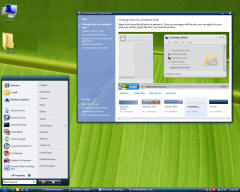 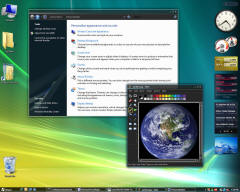 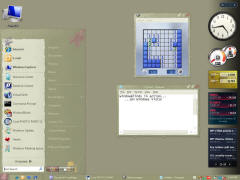 Thanks for the cool prog Frogboy.

PurrBall
Reply #3 Tuesday, March 13, 2007 4:31 PM
A beta of WindowBlinds 6 will be available for registered users shortly.

WB6 will include XP enhancements too though not titlebar blurring before you get excited.

Astyanax
Reply #6 Tuesday, March 13, 2007 6:16 PM
WB6 will include XP enhancements too though not titlebar blurring before you get excited.
Even though I don't use XP there are a few things im curious if WB6 will support? Such as Menu bar skinning (currently in XP uses the classic colors when using Per Pixel), and transparent rebar/menubar backgrounds?

Surj
Reply #11 Wednesday, March 14, 2007 12:02 AM
that center pic makes me wonder why microsoft hasn't created a new paint for vista. doesn't have to be a photoshop or paintshop pro, just something simple for file conversion and basic editing.

I'm all confused, and I still can't get WB5.5 and DreamScene/Scape working together /cry

c242
Reply #17 Wednesday, March 14, 2007 10:00 AM
The beta was available since Feb on SDC for OD-subscribers. This news are about the standalone/shareware version, which is always a little later.

If you don't like the option of having one choice in your animations window....how about six of them?? (shown as five, sixth one is off the screen)

I must be dreaming here...I've must have smacked my head on the floor...cuz I keep finding these things, ... didn't you guys used to have a small "preview" pic in this window as well? It's got to be me... my bad for missing all the staff meetings.

You see....I'm not trying to be a smart ass. I find things, report them...and get told off. Only person that hasn't yet to do this is Neil...and for that, I truly do hold him with utmost respect. But I fail to see how the Quality (didn't you just hire someone new? Fire them) department didn't catch something as simple as this?? This particular one has six options (all the same) whereas a few others are just duplicated.

Morpheous416
Reply #19 Wednesday, March 14, 2007 12:32 PM
Hence...my foothold on the other thread, trying desperately in all shapes and forms...to strongly advise Stardock to fix CURRENT issues before moving on...otherwise the problems follow you.

NightTrainthedark
Reply #20 Wednesday, March 14, 2007 12:40 PM
Morpheous416.. the issue you present is a skin problem not Windowblinds. When a skinner doesn't name a skin correctly, that is what happens. Everytime you installed the skin, Windowblinds installed copies of the animations and toolbar icons. That should be reported to the skinner as there nothing the Dev's can do about it.

I know vStyler and I will make sure he never makes the same mistake again.