The basics in creating a useful widget

Creating widgets with DesktopX 3 is, relatively speaking, a snap. Today I'm going to walk you through how to create a widget. It's actually going to be a pretty complicated one (for me anyway) but it will hopefully show you the ropes on how to create fully featured widget.

The widget I want to create is one I've been looking for for a long while - A disk space meter that lets the user configure which drive they are monitoring.

This is the last option on the DesktopX Standard "Welcome" screen.

Once you had loaded it, you will be created with this dialog: 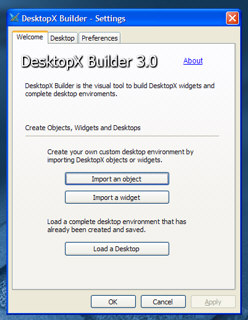 At this point, depending on your skill-level you're going to either want to import an existing widget (which is what I'm going to do because I need to have a sample in front of me) or you'll jump right in to making the widget.

Step 2: Import existing widget or create one from scratch.

Since my widget is going to be getting the amount of disk space available from a particular drive, I will want to look at a similar widget that gets the amount of free memory available. There is a sample included with DesktopX 3 that does this. So I'm going to click on the "Import a widget" button.

If I had wanted to create from scratch, I would have clicked on the "Desktop" tab in the builder dialog and chosen "New" object and started from scratch.

The widget in question is called the WM-Memory_meter widget. All it does is display the amount of free memory. It's very simple.  But the reason I need it is that I don't personally know how to get system information like this via VB Script or JavaScript.

So now I'm going to right-click on it and choose Edit Script.

So there's the whole thing. When it starts, it created a timer called "123" that gets called every 5,000ms (5 seconds). He's accessing the WMI stuff (which I'm not that familiar with).  And on the Timer, he's grabbing specific stuff from the WMI object.

So okay, how do I use this to get % of disk space available.  My answer: Google. I am going to look for "Win32_PerfFormattedData_PerfOS_Memory" in Google and see what other goodies are available. And I found this page. And boy are there a lot of different things you can display. But I find the one I want: "Win32_PerfFormattedData_PerfDisk_LogicalDisk".

But there's a bit more I need. The memory thingy in the example doesn't have to grab from a particular drive. I need a way to get the disk space free on a particular drive. That leads me back to Google where I start trying in searches to with my newly found term with drive letters and such. I find this page. It doesn't have what I have but you may find it useful for other things. I eventually make it to this page here. And then I find this gold mine! Holy cow, there are so many things I could make with this one page. Okay, one thing at a time..

I make this change in code:

It took a bit to figure out that I simply had to plugin 'C:' as the name of the drive in the query. But once I figured that out I was ready for the next step.

What sets this widget apart from others is that you can set which drive you're monitoring the disk space for. To do that, I will need to build a preferences dialog.  So I look in the "DX Scripting Guide" that comes with DesktopX and chapter 8 is "Widget Preferences".

There is only one simple rule with creating preferences -- they have to be the very first thing you do in your script or else they won't be created.  All I want to do is create a simple combo box where the user selects the drive letter.

Therefore: I need to add these lines right after the Object_OnScriptEnter:

The current value of the combo box is known as  Widget.Preference("Combolist1").value. So I go back to that other function where I had hard coded 'C:' and change it to:

The other thing we will want to add is to have it recheck when the user closes the preferences dialog (after changing the drive letter). This is from the docs.

At this point on our screen we have:

Step 5: Export the object as a widget.

Now it's time to export it as a widget.  To do that, right click on it and choose "Export".

If you have DesktopX Pro, you can export this as a "gadget" which turns it into a stand-alone program you can send to anyone.

And here we go: 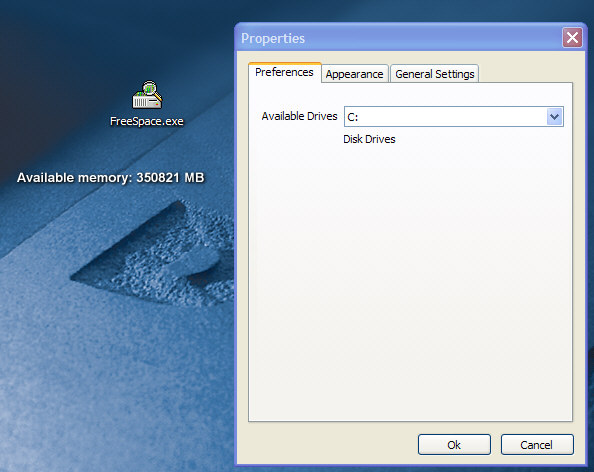 My widget is ready to go.

Here is the full source code:

A few observations worth noting.  DesktopX isn't cross-platform. On a widget enabling program such as this, this should be considered a feature not a limitation.  Because DesktopX is designed exclusively for Microsoft Windows (or 98% of the market) it is able to support all kinds of things that a cross platform program would not.  For instance, this example relied on the WMI Service of Windows. There are tons of things of this nature that are specific to Windows that can be created that wouldn't be practical if it were cross-platform since different platforms have different features and limitations.

You can learn more about DesktopX 3 at http://www.desktopx.net.  It comes in 3 forms: DesktopX Client (a run-time to make use of objects, widgets, and desktops).  DesktopX Standard which is what would be the least you'd need for this example (and comes with Stardock's mega OS enhancement suite, Object Desktop), or DesktopX Pro which allows you to export these widgets as "gadgets" that can be sent to anyone whether they have DesktopX or not.

However, there is a couple of things I want to point out.
For the preference box, it'd be very practical if the script obtainted a list of drives that can be measures and then populate the list. Otherwise you'd have to manually configure it your self. And that isn't very conveniant for users to will be using the client only version of DX. For instance, I have 2 hard drives split into a total of 8 partitions.
One easy way would be to make an loop that went from C to Z, but from a user point of view you only want to see the drives you actually can measure.
I know this article is meant to point out the basics of creating widgets, but I think it's quite importaint to show how to make widgets as userfriendly as possible. Perhaps for a seperate article.

thomassen - if you check out the code I had already put in there:

'If I wasn't so lame I'd write something that would go through the list of drives available and make sure only available drives are here but I'm too lazy for that.

I agree such a feature would be nice but that would be beyond the scope of the tutorial.


Tiggz Cabal Drives widget has a script that lists the available drives, I'd assume the same script could be used to insert values into the widget preference.

ExodusCrow
Reply #7 Sunday, March 6, 2005 11:45 PM
A real handy program to search through the WMI is "wbemtest.exe", located in your windows/system32/wbem/ directory. Another program to help scripting with WMI is Microsoft's "Script-O-Matic".

Hope this will help some people out.

MichaelG
Reply #8 Saturday, April 2, 2005 11:55 PM
I was unable to find the widget referred to in the article in the list of widgets that came with my copy of DesktopX. Could you please advise where it is located?